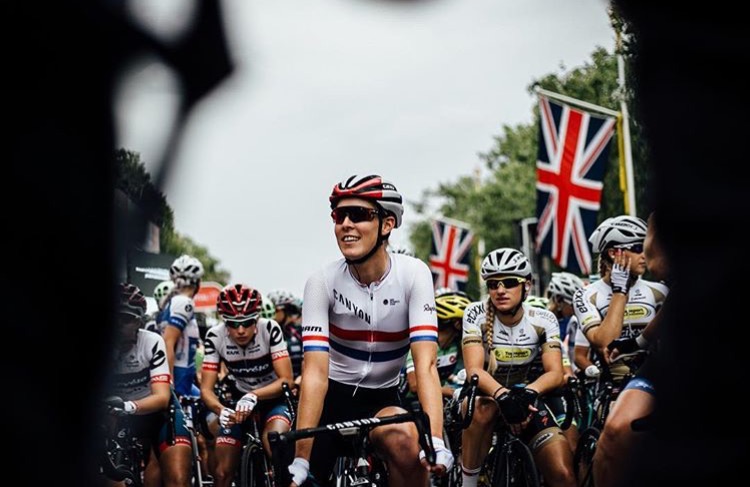 So who is Hannah Barnes?

I am 23 years old and was born in Pembury, Kent. I ride for Canyon SRAM and live in Girona, Spain. Cycling has always been a family hobby for us and I have been riding a bike for as long as I can remember. Every weekend would be filled with some kind of bike ride mainly always to a desired pub. I was 10 when I started racing at a club in Milton Keynes and it’s been my life ever since.

I have really enjoyed it. I didn’t have the smoothest introduction into the team. I signed the contact whilst in a cast; I went on the training camp 4 months later, still in a cast and the support throughout did not stop. They were always in contact with me asking how everything was going and once I  had got the all clear to start training again they made sure they didn’t rush me and gave me the opportunity for me to choose my first race so I didn’t feel I was being pressured in being ready sooner than I was happy with. As the season has gone on I have learnt so much. Having riders like Trixi and Lisa on the team means you are learning from the best and I have enjoyed taking in all their advice and knowledge. Coming second in the TTT at the World Championships after we worked hard all year was really great and it’s a result we are really proud of.

We, like everyone else, are massive fans of the Canyon SRAM Kit, of course this year yours has been replaced by the National Champs Jersey. How has it the last couple of months been for you as our champ?

I feel very proud to have the opportunity to race and train in the British jersey. I do feel some pressure when I put it on because it is such an iconic jersey within cycling and I want to honour that. Of course, Rapha made the jersey look great and I have had a lot of compliments on how amazing it looks.

What’s the weirdest conversation you have heard in the pro Peloton?

If you could replicate the career of any former pro, who would it be?

There are a lot of inspiring professional’s that have had amazing careers so it’s hard to pick a specific one. Lizzie winning the World Championships last year was amazing. And then to come into the 2016 season and dominate it how she has is super impressive. I would be very proud if I was able to achieve half she has down in my career.

What’s been your best move in the Peloton so far in your career?

I would have to say the year I moved to UnitedHealthcare. There is definitely a preferred path that most young female cyclists feel they should take and I don’t believe that is always the right way. I chose to go to America and race. At the time I saw it almost like a gamble but looking back it was the best thing I had ever done. I learnt a lot and developed and at the age of 20/21 I think that’s the most important thing you can do to better your career.

CANYON//SRAM Racing speed onto The Pearl on their way to second place at the 40 km Womens Team Time Trial, UCI Road World Championships 2016 on 9th October 2016 in Doha, Qatar. (Photo by Sean Robinson/Velofocus).

As an audience we have seen a huge growth in women’s road cycling, especially here in the UK. Do you think the sport is improving for women?

There is definitely an improvement. I have been lucky enough to be part of Women’s cycling at such a vibrant time. I find the U.K. is leading the way with the Women’s Tour of Britain and the Prudential Ride London which this year had equal prize money to the men’s event. I am excited for the next few years and to see the pattern continuing in the right direction.

Do you have any plans for the off season?

My off season has been great so far. The first 10 days were spent in England, visiting friends and family. It’s great to have the time to see everyone you don’t get to see very often when you are travelling around racing all year. This winter is going to include a lot of strength training to help build the right side of my body after last winter’s injury so I have spent some time at the velodrome putting together a gym programme. Then, tomorrow I go to Japan for a 12 day trip with Tao to some of the famous sites and cities of the country.

If you could have a super power what would it be?

Teleportation so I wouldn’t have to wait for delayed flights or sit in traffic jams.

Big Thanks to Hannah for taking the time to respond to our questions.