Cold. A very early start for a Saturday, waking up before my alarm was scheduled to go off, 6:14 to be precise. This isn’t the best of starts, it’s way too early, even for a week day.

No time for breakfast, not even time for coffee, trying to keep the noise to a minimum as I move between bathroom, bedroom and living room, sorting out kit, filling bidons and doing final checks on the bike.

7:25 and the rendezvous at the station, a quick purchase of tickets and we make the train by the skin of our collective teeth, heading down to Dorking for the short ride to the start of the Gravel Grinder.

Billed as adventure cross, the Gravel Grinder has a 6/10 difficulty rating and takes in a few climbs along the way.

As usual, some are sadistically placed further into the route, designed to sap the remaining strength from your legs after you’ve been riding for a few hours and really test your mettle.

Beginning at Denbies Vineyard, after a safety briefing/housekeeping, we’re off, a motley mix of mountain bikers in baggies, sporting visor helmets and camelbaks, some with flat pedals and trainers, some seasoned crossers (by the look of them, anyway) and a few that are like us, lovers of the road, but out to have a bit of fun in the mud on our cross/gravel bikes.

The route begins with a climb that Josh glides up, the weight of his Marin not seeming to hold him back, while I huff and puff my way up, straight into the small ring, wishing that I was on my Wilier, which is about 100kg lighter than my tank like Whyte cross bike.

Justin killing it. You can purchase photos from the Gravel Grinder here.

Then follows some bridleways, a few stretches of road and some cheeky bits of singletrack, fun for the most part, but boggy and slippery in places.

A few people slide around in the muck , particularly on one section which has a descent and climb that wouldn’t be that technical for a mountain bike normally, but on a day like today, the ground feels more like like muddy quicksand and more riders slip, one guy in full mtb getup properly stacks it, covering the visor of his downhill helmet in the Surrey mud.

Moments before seeing this, I had managed to lose my Garmin, not ideal. Having successfully climbed one muddy lump, we’d stopped for a quick comfort break and put the bikes down on the ground. I hadn’t noticed that my garmin had fallen out of the mount until reaching the aforementioned descent/climb section, and after I went looking for it unsuccessfully, Josh retraced our steps and managed to find it after a few minutes of searching.

Crisis averted, but this wasn’t the final problem we’d encounter during this event.

We ploughed on, quite literally at points, with the singletrack seeming like a mud bath, punctuated by sections of tarmac until a sign was misread and we found ourselves on a very precarious downhill section with around 10 others who also headed in the wrong direction. Thankfully after riding a few “unofficial” trails, a couple of the guys in our group managed to navigate us back towards the tarmac and eventually we found our way back towards a familiar sight, Ranmore Common.

Josh moments after frolicking  in the mud. You can purchase photos from Gravel Grinder here.

The road through Ranmore is one that we frequently take on, albeit on tarmac, so we knew that the end was in sight, but it was this final part of the route where we encountered the most trouble…

The trail that runs alongside the main road was muddier and wetter than most of the parcours and it was here that Josh found himself stuck in the mud twice before going sideways, falling over and covering himself in the stuff. At least he was able to laugh about it, and escaped without doing any damage.

Having picked himself up, we carried on, and as Josh overtook me before the main drop down into Dorking, disaster struck. I heard a crunch behind me and looking down, saw my rear mech tangled in my spokes, snapped off at the hanger, with a large twig, clearly the culprit hanging out of the back of the mech.

My sportive was officially over at this point. Thanks to the passing cyclist for the use of your chain tool – Josh was able to free my mech from the spokes and break the chain. He then proceeded to push me for about 15 minutes so that we could cross the line together, evoking memories of that time when Tony Martin was pushed to the finish by his domestiques in the 2015 Tour de France.

Disasters aside, it was a cracking day out and a chance for us to both practice our bike handling skills on terrain that was more challenging than our usual weekend road rides.

Would I do it again?

It’s like anything bike related, you suffer, sweat and experience difficulties but ultimately you can’t wait to get back on the bike and do it all again. In my case, it may be a little while as I need to put some components back onto my bike first, but I can’t wait to hit the trails again, I just hope that the ground is drier next time.

Finally, a big thank you to UK Cycling Events for putting on a great day and for giving us two places in the sportive. For anyone who is thinking about trying out cyclocross racing, this event is recommended as if you can get through it unscathed, then you’ll probably be alright in a race. We’ll see you there in 2017! 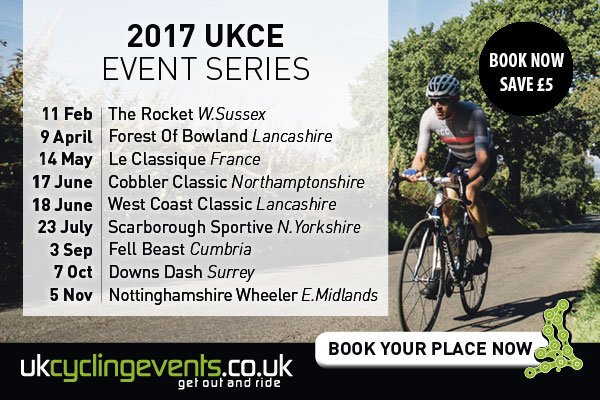 Newly added UKCycling Events for 2017. You can see the full calendar for next year here.